The warning signal raised by the PEMEX core studies was to no avail. Chicxulub had become the KTB impact crater. This foregone conclusion only lacked the evidence. A frantic hunt for confirmation of the KTB age of the Chicxulub impact crater had begun. The best evidence that could be hoped for now rested on the stratigraphic position of impact ejecta, such as melt rock glass spherules, shocked quartz minerals, and especially an Ir anomaly.

The first discovery made at Beloc in Haiti resulted in an avalanche of rapid publications all of which claimed the Chicxulub impact was precisely KTB age based on biostratigraphy, an Ir anomaly and Ar/Ar ages of impact spherules (Izett et al., 1990, 1991; Izett, 1991; Channell, 1991; Sigurdsson et al., 1991a,b; Maurasse and Sen, 1992; Jehanno et al., 1992; Dalrymple et al., 1993). Impact spherules were found to consist of black and amber yellow spherules  with different ages.

The case seemed strong. But critical data was missing on biostratigraphy, quantitative assessments of the response to the KTB catastrophe by planktic foraminifera, the sedimentology and geochemistry. We felt that the age of the impact ejecta at Beloc could not be confirmed without these more detailed analyses. Despite the dangerous and hazardous conditions of fieldwork in Haiti (even in the 1990s), Keller, Adatte and Stinnesbeck ventured to Haiti and conducted the first comprehensive field investigations collecting KTB sequences from five outcrops along the road and on the slope below.

The results of these studies failed to support the earlier reports. Fieldwork of the classic Beloc locality along the road revealed that these outcrops are tectonically severely disturbed and incomplete, sheared, folded and faulted. This is particularly evident in the prominent folded 10-15 cm thick impact spherule layer (Fig. 7). We found relatively undisturbed and expanded KTB outcrops along a steep slope below the road 1 km north of Beloc (Fig. 6), which were previously reported on by Maurasse and Sen, 1991; Jehanno et al., 1992; Leroux et al., 1995; Lamolda et al., 1997).

Figure 7. KT section exposed along the road near Beloc north of Jacmel. All road outcrops examined are incomplete, sheared, folded and faulted, which is particularly evident in these folds showing a prominent 10-15cm thick spherule layer. From Keller et al., 2001.

Our biostratigraphic, sedimentological and geochemical studies of the five Beloc sites could not support a KTB age for the Chicxulub impact (Keller et al., 2001; Stüben et al., 2002) (Figs. 8, 9). Critical discoveries include: a hiatus at the KTB accounts for the missing KT clay layer and Ir anomaly with erosion of the lowermost Danian as well as uppermost Maastrichtian. 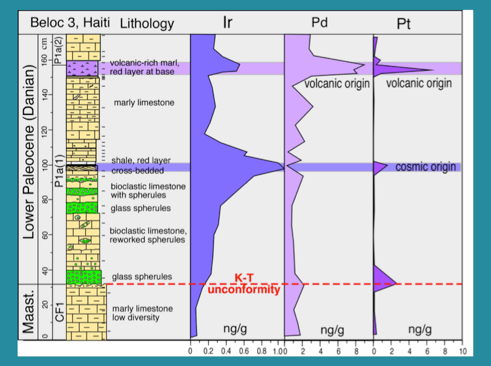 Figure 9. Biostratigraphy and PGE geochemistry of the Haiti KTB section. Note the multiple impact spherule layers reworked in early Danian sediments. This evidence does not support a KTB age for the Chicxulub impact. From Keller et al., 2001.

The presence of impact spherules in Danian sediments first observed in Haiti was subsequently observed in Cuba, Belize, Guatemala, Caribbean and N. Atlantic (reviews in Keller, 2003a, b; Stüben et al., 2005; Keller 2008). In all localities a major unconformity is present at the KTB. Haiti could not substantiate Chicxulub as the KTB impact.